DEXTER, Mich. – U.S. Secretary of Labor Alexander Acosta toured local equipment manufacturer Stanley Infrastructure, a division of Stanley Back & Decker, today in Dexter, Michigan, meeting many of the 250 employees who work there as well as officials with the Association of Equipment Manufacturers (AEM). The visit was one of several stops Secretary Acosta made in Michigan Wednesday to highlight the economic benefits of the United States-Mexico-Canada Agreement (USMCA) and urge for its ratification.

“The USMCA creates more opportunity for American workers,” said U.S. Secretary of Labor Alexander Acosta. “The provisions in the USMCA open markets for American companies to create good family-sustaining jobs in Michigan and around the country.”

“It was a pleasure to host US Secretary of Labor Alex Acosta at our newly acquired IES-Attachments facility where we manufacture landscaping, light construction and snow removal attachments, and employ 250 people.” Said Doug Redpath, President of Stanley Infrastructure. “At Stanley Black & Decker, we are committed to making where we sell and this facility reflects that commitment, serving the construction, land management and material handling industries across the U.S. and we were pleased to talk with the Secretary about the importance of promptly resolving our trade issues with the US-Mexico Canada Agreement and with China.”

Stanley Black & Decker is an AEM member, along with more than 1,000 companies representing over 200 product lines in agriculture and construction-related industry sectors worldwide.

“With nearly thirty percent of the equipment manufactured in the U.S. designated for export, and Canada and Mexico being our industry’s largest export markets, ratifying the USMCA is our industry’s top priority,” said Kip Eideberg, AEM’s Vice President of Government & Industry Relations. “Equipment manufacturers will work overtime to help the administration secure passage of the agreement in Congress this year.”

U.S. equipment manufacturers have been steadfast in their support of the administration’s efforts to modernize and strengthen the North American Free Trade Agreement (NAFTA), by replacing it with the USMCA. This includes equipment manufacturing workers continuing to let their members of congress know about the need to pass the USMCA through AEM’s national grassroots campaign I Make America.

Once ratified, the agreement will preserve duty-free access to our industry’s largest export markets, Canada and Mexico. Last month, the U.S. International Trade Commission (ITC) reported that the USMCA could create 176,000 American jobsand add more than $68 billion to the U.S. economy.

More than 90,000 jobs have been added in Michigan according to the U.S. Department of Labor since the beginning of President Trump’s administration in January 2017.

During a tour and discussion at heavy-equipment attachments manufacturer Stanley Infrastructure in Dexter, MI, Secretary Acosta discussed how the USMCA and deregulation will further help American manufacturing and create new jobs. 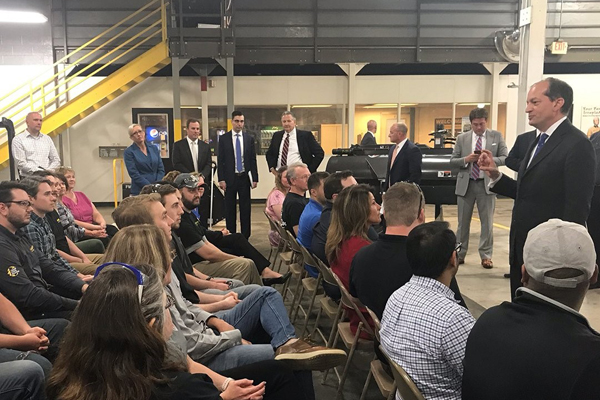 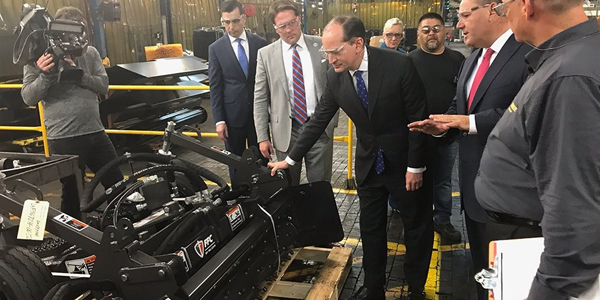 About AEMAEM is the North American-based international trade group representing off-road equipment manufacturers and suppliers, with more than 1,000 companies and more than 200 product lines in the agriculture and construction-related industry sectors worldwide. The equipment manufacturing industry in the United States supports 1.3 million jobs and contributes roughly $159 billion to the economy every year. AEM is headquartered in Milwaukee, Wisconsin, with offices in the world capitals of Washington, D.C.; Ottawa, Canada; and Beijing, China. AEM is celebrating its 125th anniversary in 2019.