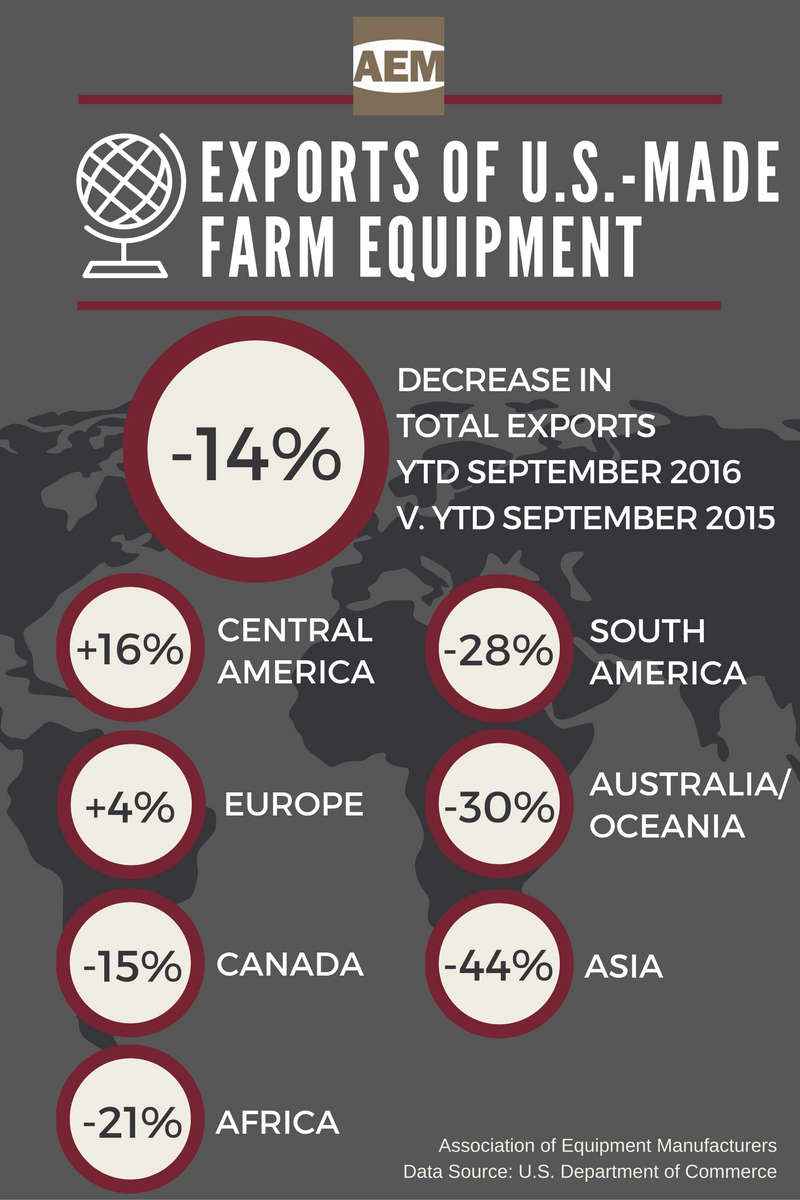 Exports of U.S.-made agricultural equipment were down 14 percent overall for the first three quarters of 2016 compared to 2015 January – September, for a total $5.1 billion shipped to global markets.

Europe and Central America continued to be the growth leaders with Asia leading the double-digit declines for the other world regions, according to the Association of Equipment Manufacturers (AEM), citing U.S. Department of Commerce data it uses in global market reports for members.

“In the third quarter of 2016, U.S. agriculture equipment exports to the world continue to decline, and the year-over-year third-quarter exports were lower than year-to-date, with a 17.6 percent Y/Y decline, the highest Y/Y quarterly decline this year so far.

“The ag equipment industry continues to suffer from a global ag downturn in large part due to low commodity prices. While some countries might benefit from their higher commodity production levels, the U.S. manufacturers are watching from the sidelines as a strong dollar is making them less competitive in the global marketplace. Of course, the strong currency is a problem that plagues all U.S. exports.

“Our expectations for the fourth quarter remain subdued as the U.S. dollar is experiencing its longest rally in 16 years. With the global economic malaise, the slowdown in emerging markets and the negative interest rates seen in several economies’ bond markets, investment is flowing to the U.S. and U.S. stocks, driving up demand for our dollar, inadvertently affecting our competitiveness abroad.”

The top countries buying the most U.S.-made agricultural machinery during the first three quarters of 2016 (by dollar volume) were:

About the Association of Equipment Manufacturers (AEM) - www.aem.org AEM is the North American-based international trade group providing innovative business development resources to advance the off-road equipment manufacturing industry in the global marketplace. AEM membership comprises more than 900 companies and more than 200 product lines in the agriculture, construction, forestry, mining and utility sectors worldwide. AEM is headquartered in Milwaukee, Wisconsin, with offices in the world capitals of Washington, D.C.; Ottawa, Canada; and Beijing, China.