The Oldest and Youngest Members of the AEM Hall of Fame

The Oldest and Youngest Members of the AEM Hall of Fame

Can You Guess Who They Are? 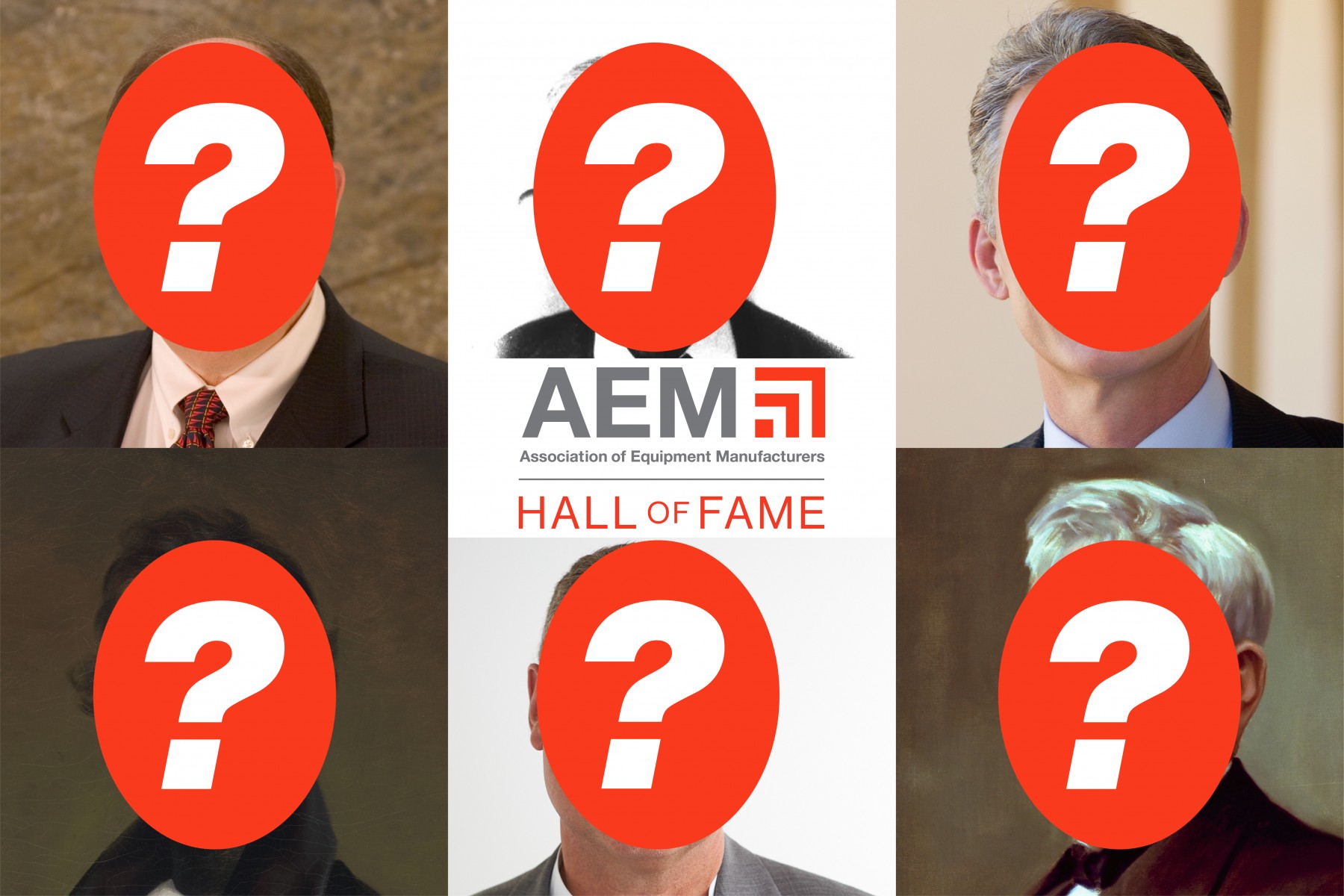 As the nomination process for the Association of Equipment Manufacturers (AEM) Hall of Fame accepts new nominations for 2022 (submit yours here), we look at the three oldest and youngest members among the 66 inductees who have contributed to the industry and our community’s way of life. The age range is vast, with 158 years separating the birthdates of the oldest and youngest Hall of Fame members. Can you guess who they are? 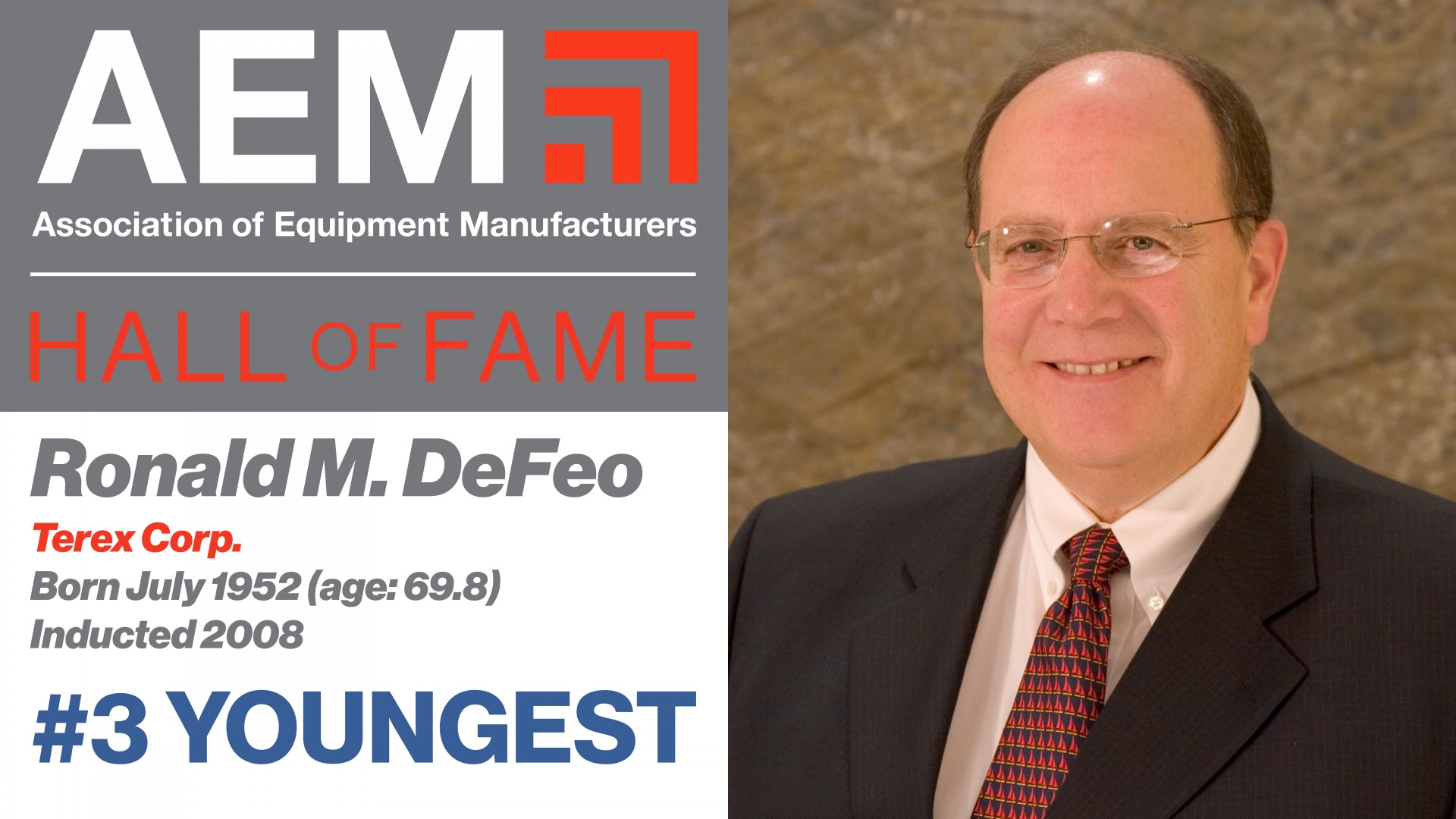 Ten years after Terex Corporation was purchased from original owner General Motors in 1986, DeFeo was appointed chairman and CEO, expanding the company portfolio significantly during his tenure which lasted until 2003.

Terex under DeFeo added Powerscreen, CMI Roadbuilding, Genie Industries, and Tatra under its umbrella, and grew an average of 27 percent per year. 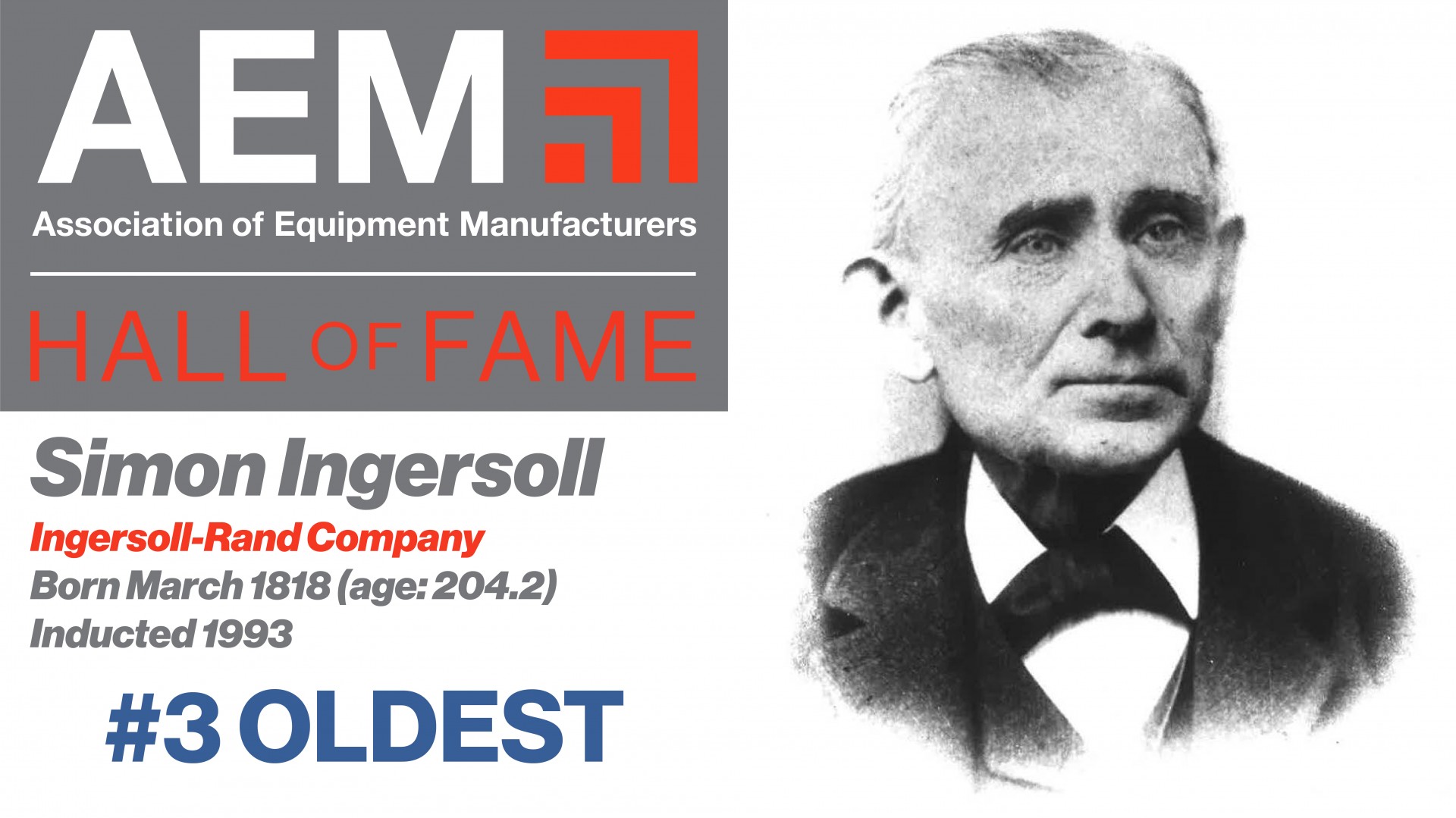 Just because someone is already more than 200 years old doesn’t mean they’re the oldest.

Inducted in 1993 in the very first class of the AEM Hall of Fame, Simon Ingersoll was already 53 years old when he patented his first steam-powered rock drill in 1871, decades before gasoline or diesel engines would be available to power work on jobsites.

Despite his contributions to the mining and construction industries (the basis of his percussion drill is still used today), and the sale of his patents, Ingersoll would die penniless in 1894 at the age of 76. 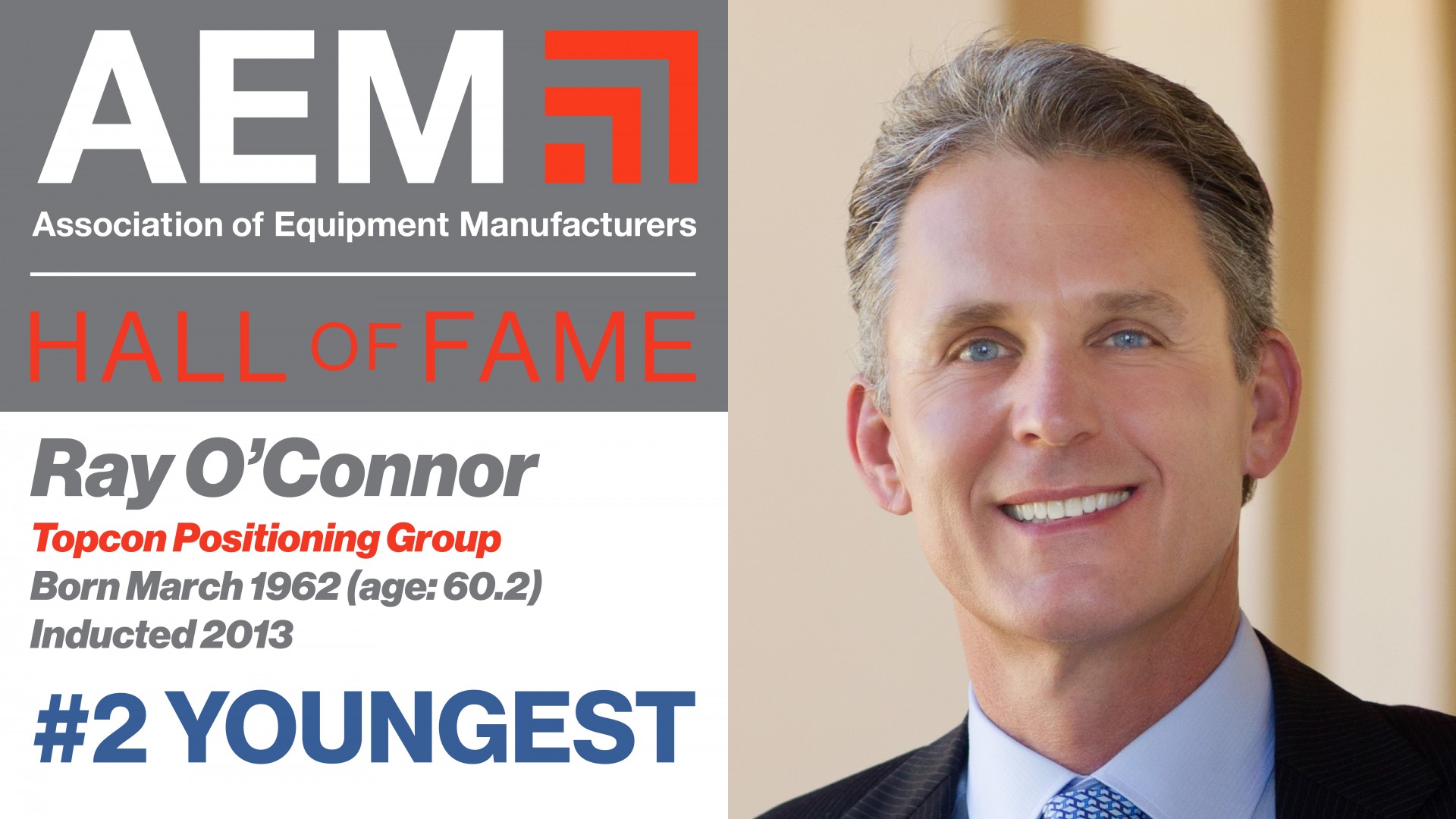 While O’Connor is, and remains, the youngest member of the AEM Hall of Fame at the time of induction, at just 52 years old, one other member is younger overall, if only slightly so.

O’Connor joined Topcon in 1993 with a goal of automating the construction industry. By being a leader in merging imaging, GNSS, scanning and software technologies, hardly a construction site on the globe exists without some degree of positioning automation. For O’Connor, it’s all about conserving the world’s most unrenewable resource: time. 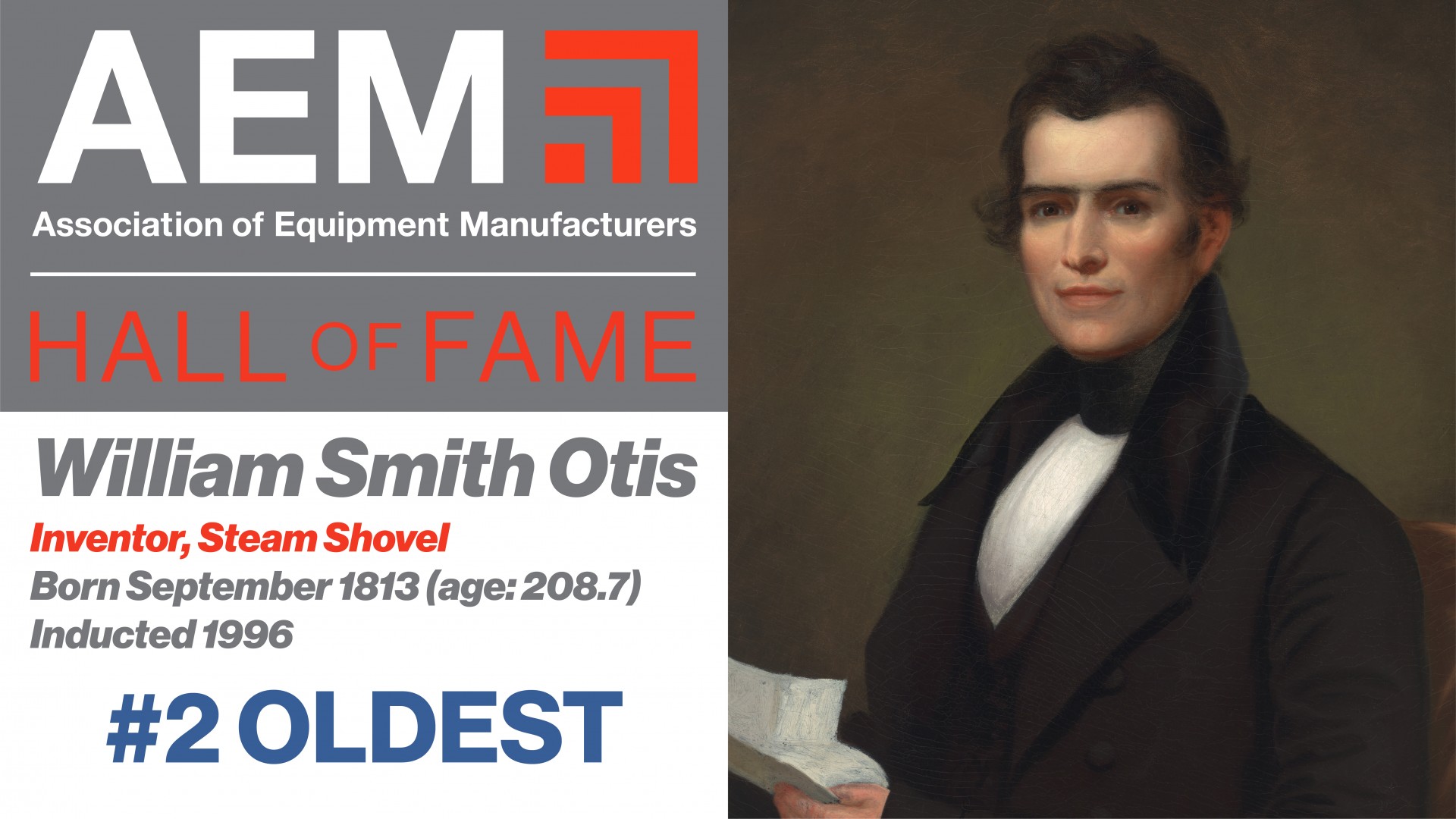 William Smith Otis is a tragic example of those who burn brightest burn fastest.

Born in 1813 in Massachusetts, as cousin of elevator inventor Elisha Graves Otis, William Otis had created his first steam-powered mechanical excavator at the age of just 22. Otis focused his work on building railroads, and his patent filing showed a steam-powered excavator mounted on a rail car that could dig and remove earth, turn, and deposit it somewhere else, like another railcar. 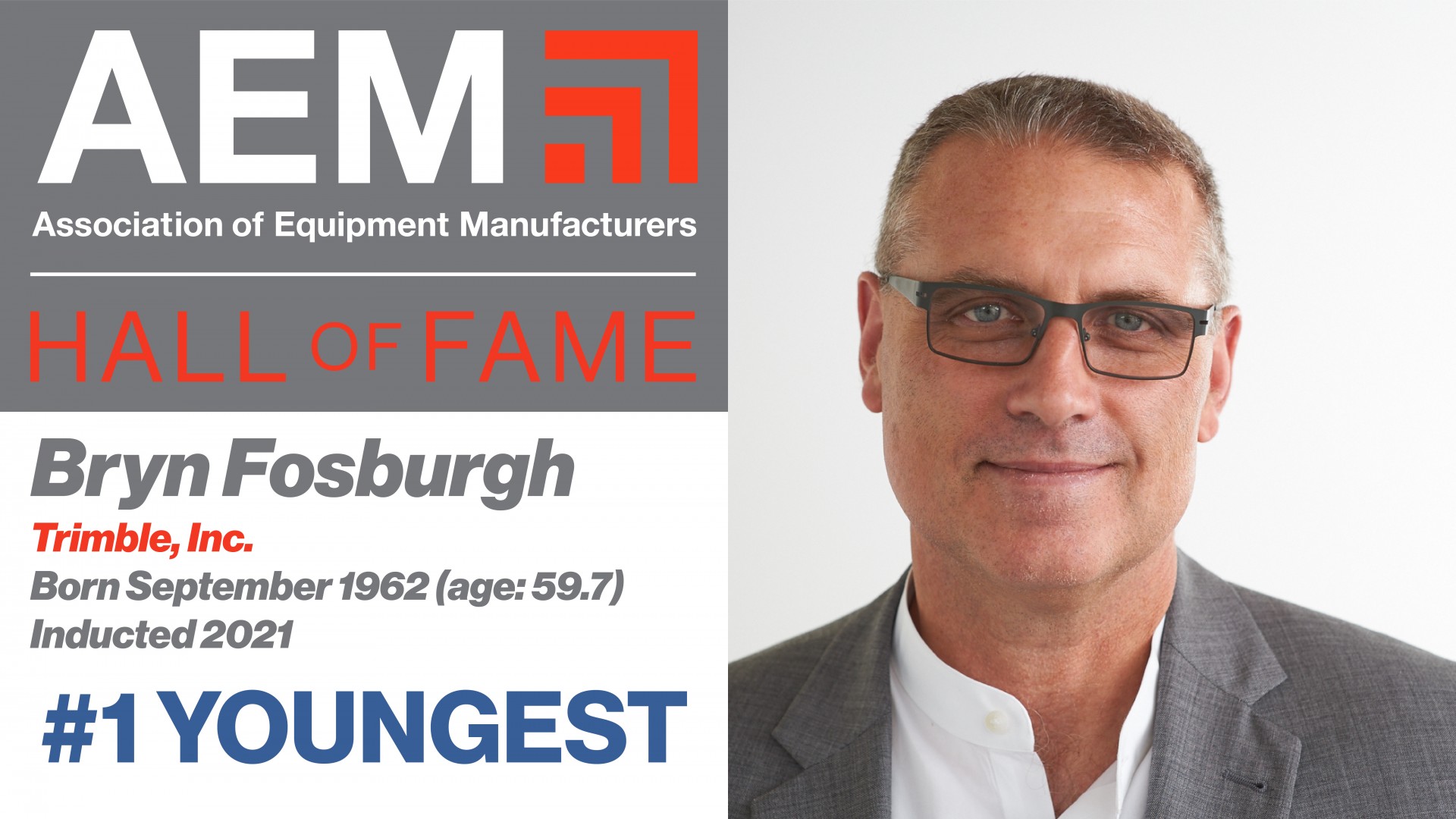 The AEM Hall of Fame’s youngest member at the time of induction, at 51 years old, is also its most recent.

Born in 1962 in northern Wisconsin, Fosburgh would go on to co-develop real-time kinematic (RTK) technology, which is what allows the GPS device in your phone (or car, or tractor, or excavator) to know exactly where you are, within centimeters, in real time.

In addition to his innovative global positioning work, Fosburgh has also used his abilities to both train future engineers at universities in Western Africa and help with severe earthquake recovery efforts in Japan and China. 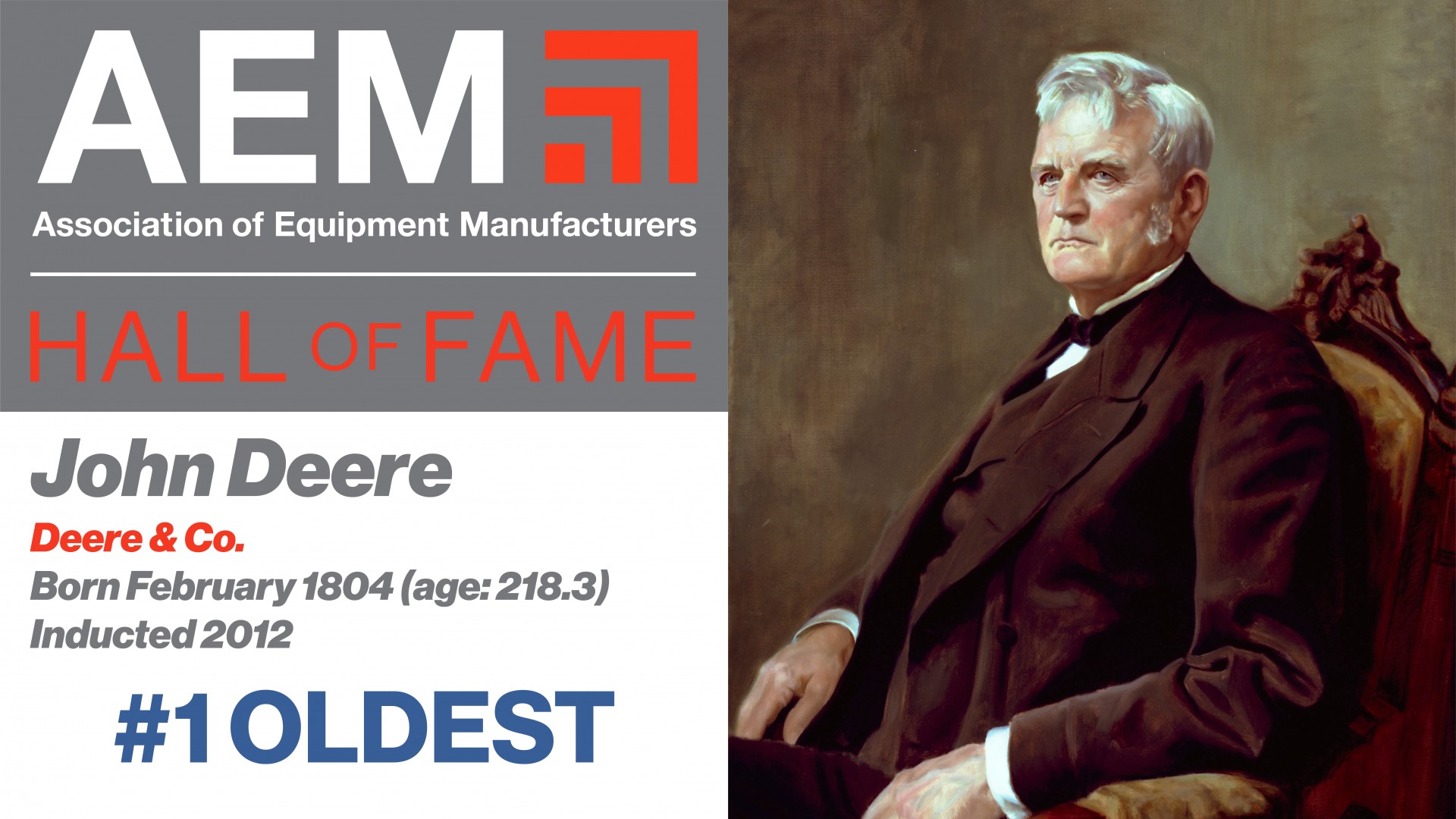 Having grown up working in his father’s tailor shop in Central Vermont, Deere’s father taught him that, by polishing the sewing needles in sand, they would pass through the cloth more easily. After moving to Northern Illinois and finding work as a blacksmith, he heard the horror stories of the ‘worthless’ midwestern soil that could only grow grass and was too sticky to be plowed.

In 1827, at just 23 years old, Deere would create his first cast iron plow with a polished, cast steel share. Eleven years later, he would sell his first all-steel plow to a local farmer, and from that farmer’s recommendation to his local peers, John Deere started taking its first orders, and hasn’t stopped since.

If you know of someone who should be in the AEM Hall of Fame but isn’t yet, nominations are open until June 17, 2022, and can be submitted online at this link. Tips for how to submit a nomination with a better chance of success are available here. AEM seeks nominations for both current-day innovators as well as those who are no longer with us who made a difference in the industry.