SELF-PROPELLED COMBINE SALES INCREASED SIGNIFICANTLY IN JANUARY, ACCORDING TO AEM

SELF-PROPELLED COMBINE SALES INCREASED SIGNIFICANTLY IN JANUARY, ACCORDING TO AEM

U.S. retail sales of self-propelled combines were up significantly in January, showing a year-over-year increase of 21.4 percent, according to the Association of Equipment Manufacturers (AEM), the leading trade organization for off-road equipment manufacturers and suppliers. In addition, sales of less than 40HP tractors showed positive growth with 5,354 units sold in January, which is an increase of 13 percent year over year. Conversely, sales of 40-100HP tractors decreased for the third consecutive month, and sales of larger than 100HP 2WD tractors and 4WD tractors also decreased.

“We’re seeing some bright spots in the data from January sales, and our members tell us they are gearing up efficiency and are better prepared to meet the challenges of this new normal than they were 12 months ago,” said Charlie O’Brien, AEM senior vice president.

“In addition, last week the USDA announced that 2016 net cash farm income is expected to be down for the third consecutive year, though the decline will only be 2.5 percent, which indicates stabilization in comparison to the more than 30 percent drop last year. While this deterioration in farm economics will undoubtedly affect our industry, there is still some hope that production ag might get a boost from an extended Section 179.” 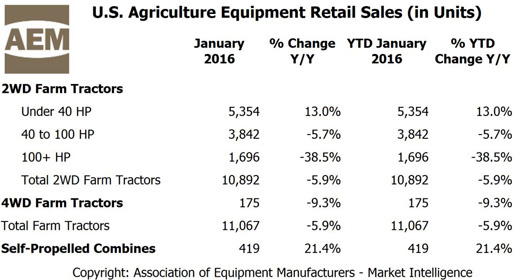 Data from AEM’s Agriculture Equipment Retail Sales Flash Report is provided monthly and is derived from AEM member companies through our proprietary statistical reporting programs. The analysis of the data is provided by AEM’s Market Intelligence department.

Visit www.aem.org/agreports to view the reports, as well as reports from Russia and Canada.

About the Association of Equipment Manufacturers (AEM) - www.aem.org