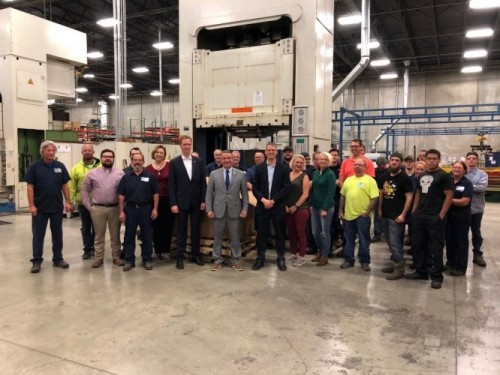 “Meeting with the employees of Graepel North America reinforces for me the need to pass the USMCA because of the positive impact it will have on not only their industry and its workers, but all broad industries within the U.S. economy,” said Rep. Bacon. “I’m thankful for the opportunity to hear directly from the employees about what is important to them and their livelihoods.”

I Make America, AEM’s national grassroots campaign, works throughout the year to host elected officials and other policymakers at member companies’ facilities across the United States. Graepel North America, a manufacturer of perforated steel products, is located in Omaha.  Employees asked the Congressman about a variety of federal policies, including the imminent trade deal with Canada and Mexico.

“We are grateful to Congressman Bacon for his visit and his ongoing support of the equipment manufacturing industry,” said Graepel North America President & CEO Mark Zumdohme. “He has always been a strong advocate of equipment manufacturers and the policies that benefit our industry's 1.3 million men and women, including the United States-Mexico-Canada Agreement. USMCA is critical to our industry's continued growth and it is due time for Congress to ratify the trade agreement.”

Photos should be attributed to the Association of Equipment Manufacturers.