For the first time in three years, the gap between Ag equipment dealers’ and manufacturers’ opinions on equipment inventory levels has significantly narrowed.

In a 2018 survey conducted by the Association of Equipment Manufacturers (AEM) and the Equipment Dealers Association (EDA) of their respective members, the majority of dealers report that their new inventory is just right, although inventory is still too high. By contrast, manufacturers have consistently held a more positive opinion of their dealers’ inventory.

In 2016, the first year this survey was completed, a significant majority of dealers felt that both their new and used inventories were too high. In 2017, while there was still a slim majority of dealers that thought inventory was too high, there was almost a 20 percent decrease from 2016. By contrast, the last two years of data showed that manufacturers believe that inventory of both new and used equipment are at the right level.

When considering the second quarter (April, May and June) of 2018, manufacturers agree – although not by wide margins – that their companies’ inventories are staying about the same. They agree much more dramatically (65 percent) that their dealers’ inventory levels remained stable in the second quarter. Dealer respondents on the other hand, overwhelmingly reported that both new and used inventories have been decreasing. 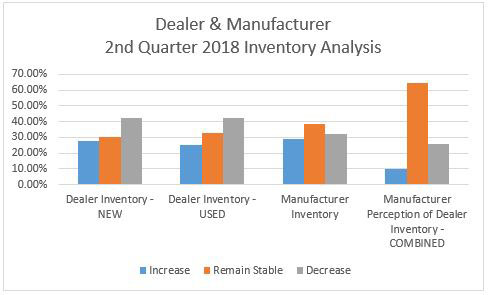 While overall the results of the 2018 survey are positive for both dealers and manufacturers, there are economic implications to consider. Based on previous research, AEM and EDA know that, in regards to inventory, both groups are cognizant of the potential effect of steel and aluminum tariffs on the industry.

“Overall we are looking at favorable numbers in 2018,” said Curt Blades, AEM senior vice president, Ag Services. “Surveys of our membership show a good majority feel the market has been strong this year, but we could see changes in next year’s survey. A lot will depend on the lingering uncertainty of tariffs and trade and the potential impacts on current positive market performance.”

“We’ve heard from our dealers that tariffs have already begun to impact their businesses,” says Dykes. “We have dealers who have been forced to place advanced orders for equipment to avoid tariffs, and those who have already been told by their customers that they will delay or cancel purchase decisions due to higher prices. “

While the extent of the impact remains uncertain, both EDA and AEM members are both reasonably concerned about what these trade wars and tariffs will mean for the industry.

For additional data from dealers and manufacturers on this topic, check out AEM and EDA’s Tax & Tariff survey, completed in early 2018.

About the survey: Beginning in 2016, the Association of Equipment Manufacturers (AEM) and the Equipment Dealers Association (EDA) have partnered to gain insight into new and used inventory trends in the agriculture equipment market. Each summer, AEM and EDA distribute a brief survey to their members and collect data for approximately two to three weeks.

About AEM: The Association of Equipment Manufacturers (AEM) is the North American-based international trade group representing off-road equipment manufacturers and suppliers, with more than 950 companies and more than 200 product lines in the agriculture and construction-related industry sectors worldwide. The equipment manufacturing industry in the United States supports 1.3 million jobs and contributes roughly $159 billion to the economy every year.

About EDA: Founded in 1900, the Equipment Dealers Association (EDA), is a non-profit trade organization representing 4,500 retail dealers extensively engaged in the sale and service of agricultural, construction, industrial, forestry, outdoor power, lawn and garden, and/or turf equipment. EDA provides essential value to its members by enhancing the dealer-manufacturer relationship and advocating for a positive legislative and regulatory environment. EDA is headquartered in St. Louis, MO and is affiliated with regional associations located throughout the United States and Canada.