A building series of circumstances, from weather to trade policy, are putting downward pressure on the agriculture sector of the economy, however, ag equipment dealers and manufacturers believe dealer inventory levels are “about right,” and are primarily expecting flat results in the coming year.

According to the latest survey conducted by the Association of Equipment Manufacturers (AEM) and the Equipment Dealers Association (EDA), manufacturers and dealers are more in agreement on new-equipment inventory levels than they have ever been in the past. Half of manufacturers say dealer inventories of new equipment are “about right,” while almost 58 percent of dealers say the same. That reduces the amount of separation from last year’s already-record level of agreement by nearly half. 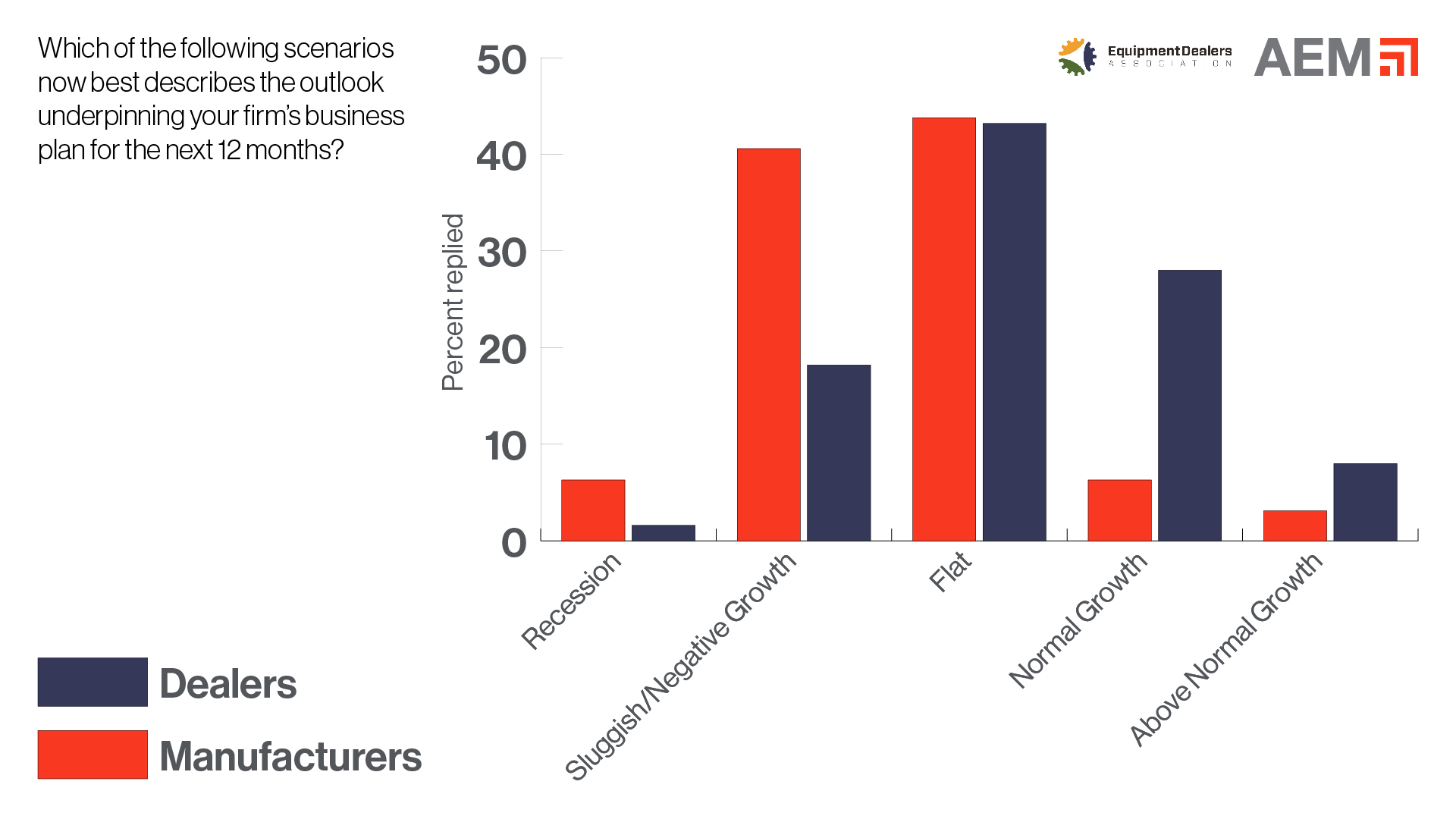 Meanwhile, roughly 43 percent of both groups are planning for a flat performance next year. From there, 36 percent of dealers are planning on normal growth or better, while about 9 percent of manufacturers say the same.

The reasoning for those disparities in thought may come from market exposure.

“The data shows manufacturers are noticeably more concerned about trade issues and economic performance globally, where economic data is showing headwinds especially in Europe and China,” said AEM Senior VP of Ag Services Curt Blades. “Fortunately, the trade issue is one that can be controlled, and we’re optimistic U.S. and world leaders will resolve these disputes in the near future.” 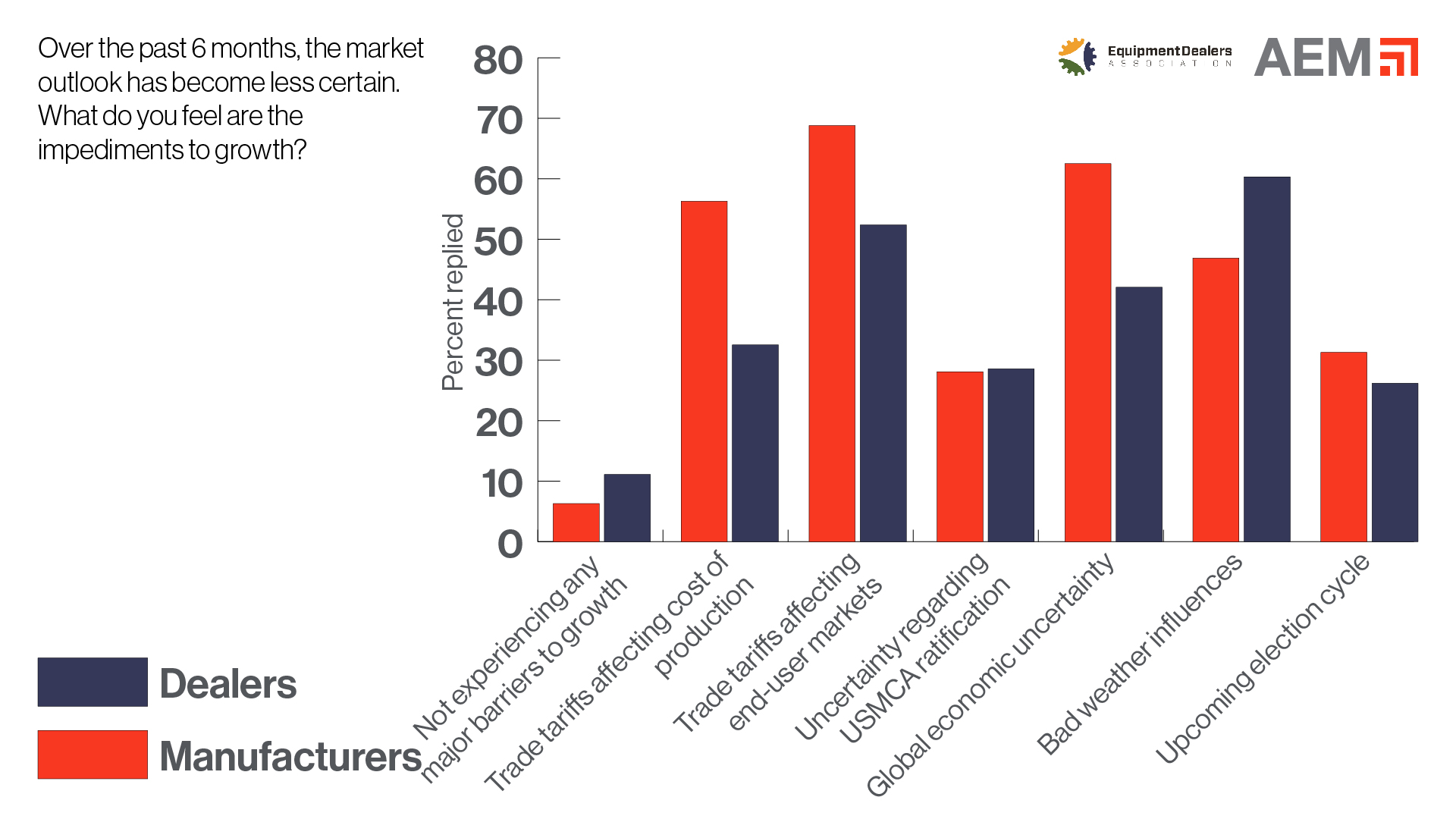 “Ag equipment dealers are echoing the concerns of their clientele, the farmers,” said EDA VP of Industry Relations Joe Dykes. “Their biggest concern is the challenging weather conditions that have made planting and harvesting difficult and even impossible in some regions. Tariffs on end-user markets is their next largest concern, and you can see that especially in the dairy sector.”

Both manufacturers and dealers are looking to reduce costs to adjust to conditions, with dealers focusing on smaller equipment orders, and manufacturers focused on containing headcount.

Beginning in 2016, the Association of Equipment Manufacturers (AEM) and the Equipment Dealers Association (EDA) have partnered to gain insight into new and used inventory trends in the agriculture equipment market. Each summer, AEM and EDA distribute a brief survey to their members and collect data for approximately two to three weeks, in order to help both find how much agreement there is between the two groups. 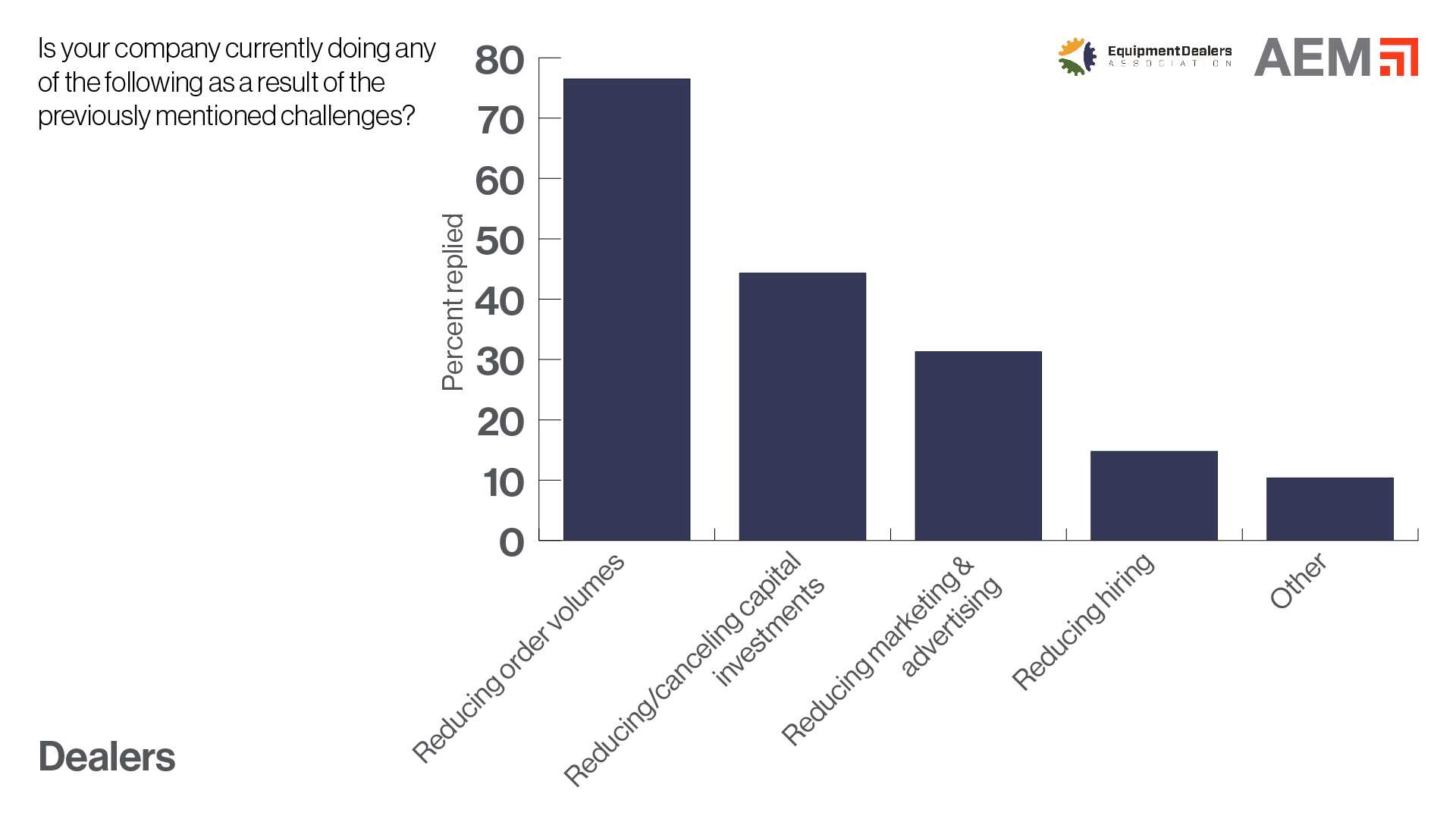 AEM is the North America-based international trade group representing off-road equipment manufacturers and suppliers with more than 1,000 companies and more than 200 product lines in the agriculture and construction-related industry sectors worldwide. The equipment manufacturing industry in the United States supports 1.3 million jobs and contributes roughly $159 billion to the economy every year.

Founded in 1900, the Equipment Dealers Association (EDA), is a non-profit trade organization representing 4,500 retail dealers extensively engaged in the sale and service of agricultural, construction, industrial, forestry, outdoor power, lawn and garden, and/or turf equipment. EDA provides essential value to its members by enhancing the dealer-manufacturer relationship and advocating for a positive legislative and regulatory environment. EDA is headquartered in St. Louis, MO and is affiliated with regional associations located throughout the United States and Canada.