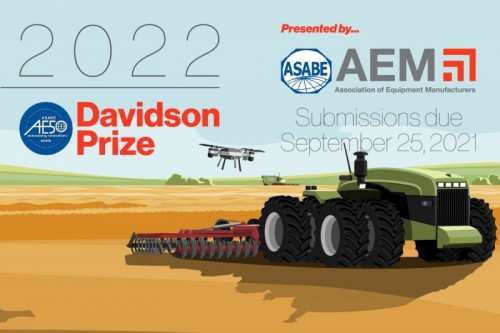 The American Society of Agricultural and Biological Engineers (ASABE) and the Association of Equipment Manufacturers (AEM) are seeking additional nominations for the annual AE50 Awards and the prestigious Davidson Prize. The programs recognize new and innovative engineering and technology introduced in the past year in agriculture. The deadline for entries is September 25, 2021.

“ASABE is pleased to once again sponsor the AE50 awards program, which celebrates companies for their recent engineering developments in agricultural, food, and biological systems,” said Darrin Drollinger, executive director of ASABE. “We encourage your nominations and look forward to recognizing those technological innovations. Top ranked AE50 winners deemed the ‘best of the best,’ will be eligible for the prestigious Davidson Prize.”

The AE50, celebrated at the beginning of every year since 1986, hails the 50 best engineering developments in agricultural, food, and biological systems of the year. From there, up to three AE50 winners are selected for the Davidson Prize, named for J.B. Davidson, the father of modern agricultural engineering. Davidson Prize winners are announced at Commodity Classic, which will be held in March 2022 in the City of New Orleans.

“Innovations in ag technology are simply exploding with integrations of precision technologies, artificial intelligence, GPS-based control and more,” said Curt Blades, senior vice president of Ag Services at AEM. “Therefore, the AE50 and Davidson Prize aren’t just important to ag, they’re displays of some of the best scientific and engineering minds in the world, so it is truly an honor to be named a Davidson Prize winner.”

In 2021, AEM and ASABE selected Purdue University / LeafSpec, LLC for the LeafSpec a portable hyperspectral corn leaf imager, Haber Technologies, Inc for the DRI-Stack a grain drying and aeration system and AGCO Corporation for the 9350 DynaFlex® Draper Header with AutoDock™ for the honor.

About The American Society of Agricultural and Biological Engineers (ASABE)

ASABE is an international scientific and educational organization dedicated to the advancement of engineering applicable to agricultural, food, and biological systems.