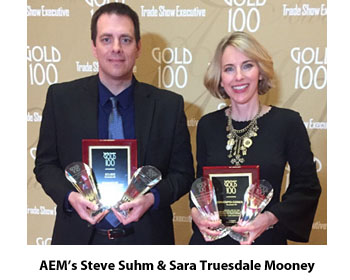 CONEXPO-CON/AGG has been named the number-one exhibition of any industry in the United States, and ICUEE-The Demo Expo took the number-three spot in the annual Gold 100 list of top U.S. trade shows.

AEM Goal: Make the Next Shows Even Better

“These awards are a tremendous honor that reflect the hard work, dedication and innovative focus of everyone involved in producing AEM exhibitions; our success would also not be possible without the support of our members and the industry,” said Megan Tanel, senior vice president exhibitions and events. “Look for more enhancements that will continue to deliver outstanding and measurable business value to exhibitors, attendees and all show participants.”

Go online to learn more about the next edition of the shows:

CONEXPO-CON/AGG is the international gathering place every three years for the construction industries. The biennial ICUEE, also known as the International Construction & Utility Equipment Exposition, focuses on utility professionals and construction contractors.